The Minister of Finance, Avdullah Hoti, visited The University of Applied Sciences in Ferizaj and held a lecture in front of students 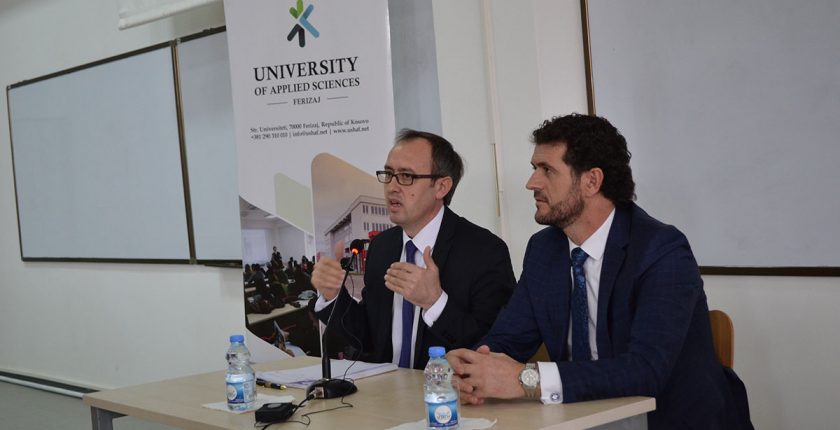 The minister of Finance was hosted by the Rector of the University of Applied Sciences in Ferizaj, and held a lecture in front of students.

Rector Bajraktari, expressed his gratitude for the visit of Minister Hoti, and informed him on the activities of UASF developments in this new institution of Public Higher Education, conditions and study programs offered, as well as increasing interest to study these programs.

Also, the Rector informed the Finance Minister on cooperation with local companies, also for international cooperation that UASF has created for a year and a half working as a University.

“We agreed to sign a cooperation agreement, where our students in certain groups will be able to do the practical work. Minister promised that despite the large number of students who will have the opportunity to participate in this practice, they will have a salary, which will be welcomed and will facilitate their studies, ” said Rector Bajraktari. He hopes that this agreement will be signed next week.

Meanwhile, Minister Hoti said he felt honored for the invitation from the University and to discuss with students about public finances, economic developments and reforms that are being made.

“We had a very agreeable meeting with the Rector and his associates, to find a form of cooperation with this university, which actually is really unique in Kosovo because of the special profiles offers. I wish success to the image that has started to build in regard to more fruitful international cooperation,” he said.

Minister mentioned that sees an extraordinary prospect for the University to prepare new alumni generation that will be ready in labor market in Kosovo, in the region and beyond. “Now we have entered in some other ways of European integration and believe that through Stabilization and Association Agreement can use various programs to assist the University in raising the quality, the international certification, thus gaining diplomas that are recognized at European level.  The Minister said he was sure that the level of employment for students who study in this university is higher than any other public and private university in Kosovo.While lecture before students, Minister Hoti spoke about the government program, where education is one of the four pillars. He said that for two years of governance, there has been realized a significant part of the government’s program, and elaborated this program, pointed to areas that are the focus on this program.  Minister Hoti during his speech also focused on fiscal policies, facilities that are being created for businesses, and spoke of international loans, which will enable the realization of major projects, which will help the economic development of Kosovo.