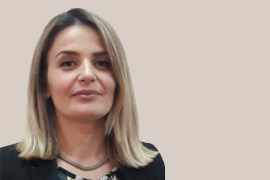 Prof. Ass. Dr. Dhuratë Hyseni is a professor at the University of Applied Sciences in Ferizaj, elected on 1 October, 2019.

She has published a numerous scientific researches in research magazines and international conferences indexed in different platforms such as Scopus, Web of Science, Springer etc. Also participant in scientific comitties in the national and international level in the field of computer science.