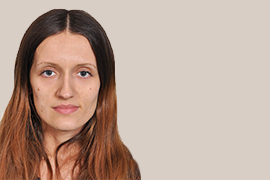 Anyla Shala was born on the 5th of August, 1994 in Ferizaj. She finished school and her undergraduate studies in the same city. She completed her Bachelor’s degree in English, in 2015. Later that same year she enrolled in a Master’s degree in English Literature, at the Univeristy of Prishtina. She defended her thesis, entitled “The Death of a Beautiful Woman in the Works of Edgar Allan Poe”, in February, 2019. Upon completion of her undergraduate studies, she started working as a teaching assistant at AAB College, where she worked for four years. She is currently an English lecturer at the University of Applied Sciences in Ferizaj.