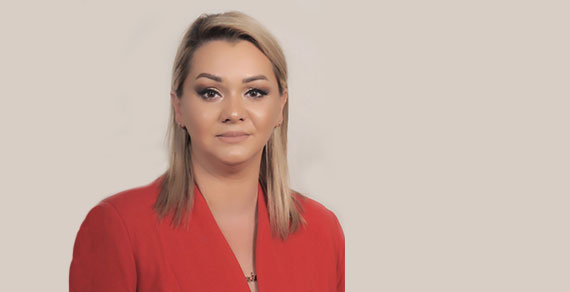 Undergraduate studies have started and finished at the Faculty of Economics in Prishtina in the Management and Finance, while in 2014-2015 she started her doctoral studies at St. Kliment Ohrid University at the Faculty of Tourism and Hospitality in Ohrid, which ends in 2017 with the topic: “MANAGEMENT COMPETENCES FOR ESTABLISHING EFFECTIVE STRATEGIES AND CONTROL, AS A FACTOR FOR HOTEL DEVELOPMENT IN PEJË MUNICIPALITY”.

Tahiri has worked in several key positions, such as: Deputy Director of the Didactic Center in Peja, from 2008 until 2010. From 2010 until 2017 she has worked as Assistant and Finance Officer at the Office of the Chairperson of the Municipal Assembly of Peja. In 2014 she started lecturing at IP – International College in Prizren. In 2015 she started teaching at the “Vision for Education” College in Ferizaj. In 2016, she began teaching at “Gjilani” College in Gjilan. In 2017 she started teaching at the “Business” College in Prishtina. She currently works as a full time professor at the University of Applied Sciences in Ferizaj at the Faculty of Tourism and Environment and lectures courses of Tourism and Hospitality.

The most popular academic works of the author are: ”Touristic potential of Kosovo and its development strategies”; “The role of tourism”; “Assessment of the quality of products in tourism”; “Market Environment and Methods of Market Segmentation”,; “The Impact of Geography on the Development of Kosovo Tourism”; “Ethical Standards in Tourism”; “Promoting Activities in Tourism Republic of Kosovo” 2018.